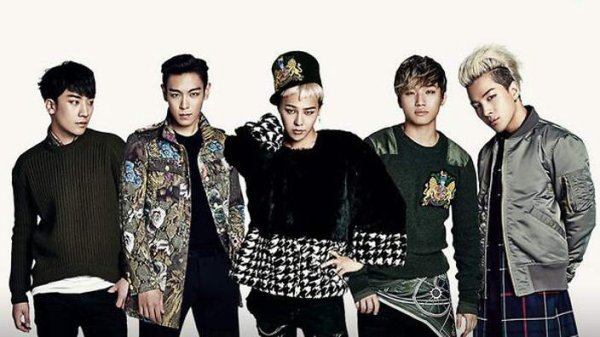 
The group consists of 5 members, with every member participating in solo activities and group activities. BIGBANG does not have an official fanclub color. Fans are called VIP.


BIGBANG made their hot debut with their single "LaLaLa" on September 19th, 2006. Their singles progressed with popularity very steadily, but it was not until "Lies" that they became a well-known group. They continued their success with "Haru Haru", "Number 1", "Lollipop", and "Tonight" topping all of Korea's major music charts. They even topped Oricon (Japanese music chart) with "GaraGaraGo!". Their musical footprint finally left the continent of Asia when they released the song/music video for "Fantastic Baby" in 2012 (this song actually helped me become a K-Pop fan). They attempted a concept no one had ever seen before, with G-Dragon's long extentions to T.O.P's crazy outfit/blue hair. They distanced themselves so much from the they set the trend for a new style and a new concept.

After a 3 year hiatus, BIGBANG recently came back with their M.A.D.E series. Each month beginning in May, they released two songs and two music videos to promote the whole album (this does not include "If You", because it was deemed too sad). Recently, I had a chance to see them in concert, and it was the best concert of my life. They really know how to put on a good show. And my tickets were amazing... just saying.