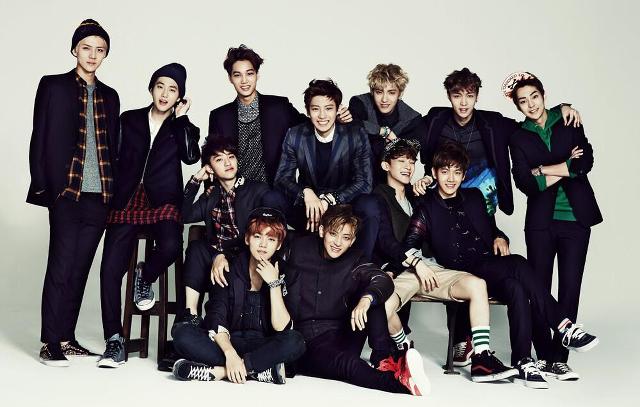 EXO is a South Korean Pop group formed by the company SM Entertainment.

The group consisted of 12 members, being split in half for different promotion cycles: one for Korean promotion and one for Chinese promotion. The Korean group is called "EXO-K" and the chinese group is called "EXO-M". EXO-M had 4 out of 6 members being of chinese decent. EXO now only has 9 members, with 3 of the original chinese members departing to pursue their own solo careers in China. Their official fanclub color is silver (I am in their fanclub). Fans are called EXO-L.

Before EXO's debut, they had a prologue single that topped most of Korea's popular music charts. With the song "What is love", EXO became a house hold name without making any official appearances in public. On April 8th, 2012, EXO made a huge splash in the Kpop market with their debut song(s) "MAMA" and "History", performed on MCountdown. Afterwards, EXO's promotional tracks had the groups popularity rising at a rapid rate. Songs like "Wolf", the repackage "Growl", and "Miracles in December" (their Christmas album) put the group in a really good spot to pioneer the K-Pop market. I did not become a fan until "Overdose" was released (I was hooked after that).

EXO retained the status of a legendary group after their hit song "Call me baby" that was released approximately a year after "Overdose", with the repackage "Love Me RIght" following shortly after. EXO's debut in Japan was a Japanese version of Love Me Right. They have recently (December 10th) released their newest emotional ballad "Sing For You" and are topping charts as usual. It has even been featured on itunes's hoem page and BillBoards top 200 songs. EXO is thee best group K-Pop has to offer (at least in my opinion). Their in sync choreo, heavenly vocals, and firey charisma have made me become an ultimate fanboy. Ya boy is trying his very best to attend their "Exo'luxion" tour in North America, and he wont stop until he gets tickets. I have a lot more to say, but I am just going to get on with the discography.